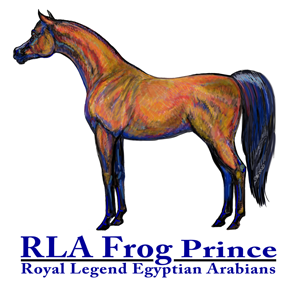 RLA Frog Prince was bred to cross with Lisa's mares of *Bakil breeding, the only son of Kaisoon (by Nazeer,) from Om El Arab imported to the USA, thus concentrating the influence of Om El Arab.

"We train them over hunter jumper fences, in western riding, and harness driving to prepare them for competition in any discipline. They thoroughly enjoy seeing the bridle, and look forward to going for a ride. Our horses are born and bred to be outstanding ridden companions."

RLA Frog Prince's get are known for their athletic ability, and beauty, in a deep-bodied, "sporthorse" style package. From endurance riding to dressage or the halter show arena, RLA Frog Prince sires tall, talented, and typy foals who are eager to work.

You're invited to call Royal Legend, and visit the farm in Bryan, Texas, to see our current selection riding horses and available breeding stock.